“We found DataForSEO online while we were planning for the beta version of our software. We were impressed by how responsive the team of DataForSEO was and by the comprehensive nature of the APIs available.”

It’s plain to see that SEO is a critical factor determining the success or failure of a business idea, but there’s more to making it happen than spamming pages with keywords. And while the growing intricacy of search engine optimization promises growth and prosperity for the few who mastered the art of exploiting it, many others – including site owners and small businesses – are often caught between the time-consuming process of learning it all and employing cost-heavy SEO services. Pathfinder SEO is a startup that aims to demystify search engine optimization without leaving anyone behind.

The founding duo – Lindsay Hasley and Lori Calcott – met at a digital marketing agency they used to work for. Having extensive experience in SEO and PPC advertising, the two realized there should be a way to do things differently. And so Lindsey and Lori ventured into the unknown, founding their own agency – webShine.

However, it wasn’t long until the crew noticed a worrying trend, which they called a “tool proliferation game.” If you ever tapped into the market of SEO software, you would know it’s crowded with extensive, complicated, and expensive solutions, each maintaining its own narrow focus. Prospects who couldn’t afford a professional service had to rely on not one – but several costly tools. They would consequently get paralyzed by expensive subscriptions and the steepness of the learning curve.

Of course, it doesn’t have to be like that. And there are two general paths for improvement: better tools or better education. Both are being individually pursued by many companies, but Lindsay and Lori decided to tackle both at the same time. Eventually, this seemingly obvious idea would translate into Pathfinder SEO – a product that goes above and beyond to educate its customers.

“Our guided SEO software is process-driven and provides a series of lessons to break SEO into a series of easy-to-follow steps. It includes tools such as keyword research, ranking tracking, and monthly reports. And the best part is coaching. All subscriptions include monthly one-on-one sessions with your personal coach.”

The idea of a well-rounded solution that would encompass years of experience in building SEO business processes while also educating customers along the way is in fact not as novel. There are a few other well-established vendors that have been actively marketing similar products.

There are many variables when it comes to landing the top spot in a wild SEO software market. On one hand, you need to spare no costs on building up the core capabilities. On the other hand, though, resources are scarce and you need to push the product to the market as soon as possible.

Now, building a custom SEO software solution doesn’t seem like such a wild idea when it’s in its early stages. Simple keyword research or rank tracking tools with a narrow customer base are also fairly simple to build and deploy.

And yet, managing the technical complexities of mining the necessary data and scaling up the infrastructure can quickly become overwhelming, especially if you consider extending a customer base beyond your fellow team members.

The situation that would’ve meant an instant no-go for many other ventures hadn’t stopped Pathfinder SEO. The team identified the solution primarily as building a fairly simple system that could nonetheless be scaled up with cost-efficiency and predictability in mind. 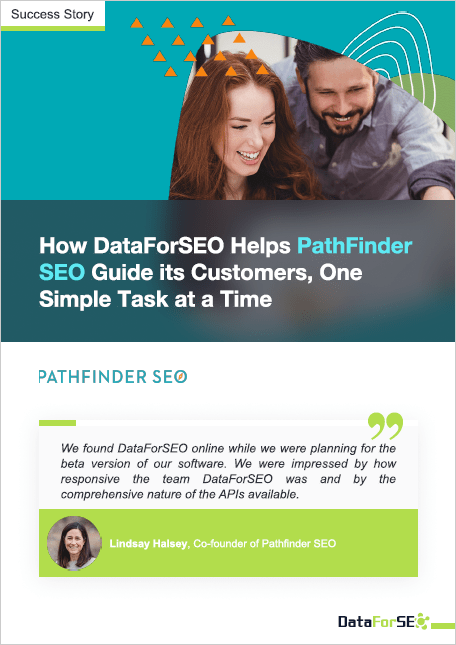 Download a full success story with Pathfinder SEO to find out how the team reached its objectives and what results it achieved with DataForSEO APIs.